Another day another dollar

Hey all. Today's been a pretty decent day, despite the rain. I hate this kind of rain, where it's misty; not enough to need an umbrella but enough to make my glasses all schmutsy. Yep, that's a technical term. I already miss the warmer weather. It was only here for 4 days or so, but I want it back!
We had a visit from our Parents as Teachers parent educator today. I am so glad I got involved in this program. As a new parent, it's wonderful to be able to gauge where my child is developmentally. And you never want to try to compare your kid with someone else's kid...not only is it very treacherous territory to tread, but kids develop so differently from one another, there's really no point in doing it. Maylee is doing wonderfully and I can't help but be proud. The PE said her vocabulary is off the charts and is doing really great in "problem solving skills."  It's so funny to see Maylee solve these "problems." One of the activities (atibities, according to Maylee) was to put 7 balls in a 6-cup muffin tin. She put the six balls in, then picked up the 7th ball. She put her finger to her chin and said, "Hhmmmm" (it was so hilarious). Then she handed it to me and said, "Here Mommy." It so amazing to see her learn right in front of me!
Brandon's also had some drama at work. They've moved him from the department he's been in for 10 years and put him doing something else. He really enjoyed the new job, but his old boss said he'd get a raise if he came back to his old department because no one could do his job as well and fast as Brandon can. After some thought, Brandon decided to go back. He's really good at what he was doing, but the new department was new and different and I think he's a little bummed. But a raise makes the outlook a little shinier.
I'm having a bit of a creative block in scrapping. I think I'm overwhelmed by all the stuff I have to scrap with. I have so many beautiful papers and elements to use, I can't decide where to start on a new project. Sometimes I start with a picture and scrap around it. Sometimes I make a whole layout and then stick the pics in when I'm done. I just don't know what to do right now. This is the last page I made: 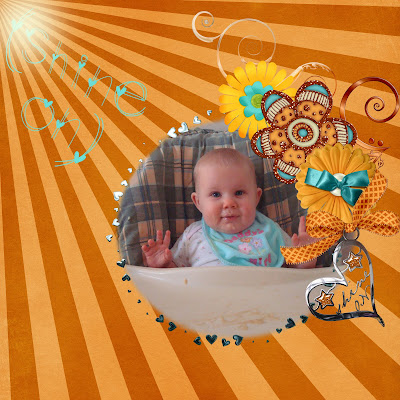 I used papers and elements from the Shine On blog train. So many talented scrap artists contributed to this. So pretty!
I finished the Jodi Picoult book I mentioned in a previous post. It was so good, as I expect from Jodi Picoult. There is a point in all her books where the emotional suspense is so great that I usually put the book down and say, "Oh my God, I can't read any more!" But I always pick it back up and finish it. Good thing to, because you're usually rewarded in the end with an surprise or twist. I'm reading a nonfiction book called Damaged : The Heartbreaking True Story of a Forgotten Child. It is so heartbreaking and poignant. I don't read nonfiction a lot, but this one caught my eye and I had to see how the wonderful foster mother in this book helped a little girl. I wish we were all as brave as this woman, and as brave as the child, too.
I'm gonna shut up now. I don't know why my posts always end up being so long. I need to learn to edit my thoughts! I've been able to post everyday I've had this blog. I hope I don't run out of things to blab about...that seems unlikey.
Posted by Kate C. at 7:35 PM

Kate C.
I'm a regular 'ol woman married to her best friend. We have a little girl who is our life.